As we all know Windows 10 is the latest Operating System from Microsoft. Before this, we had version 8. Microsoft had this policy of releasing a new version of OS once in three years. But from Windows 10 onwards instead of rolling over a new version, they send us incremental updates twice a year( released in spring and fall) with monthly quality updates.

One of the reasons why Microsoft changed from the earlier model(release of new version once in 3 years) to this new model (Spring and Fall release) was because the upgrade from the previous version to the new version was time-consuming. It did take few hours and many restarts for all the programs to set up and this would annoy the customers. With this new policy in place, the downtime due to Windows Upgrade decreased significantly. In order to reduce the downtime further, Microsoft came up with a new feature called Enablement Package in October 2019 from Windows 10, version 1903.

What is Enablement Package?

Enablement Package is basically an update package. The primary task of this package is to activate the update files that are present in the system in the dormant state. It is a few KBs in size.

With this feature in place, Microsoft sends the new update files to the system in advance and they can be preinstalled in the system as well. However, they can only be activated when they are released by the company via Enablement Package.

When Windows 10 version 20H2 releases, we can activate the features that were delivered earlier, using the enablement package that is sent with this release. With a single restart, all the new features can be enabled reducing the downtime due to the Upgrade of a system to a great extent.

As an example, we can see the file, Feature Update to Windows 10 20H2 enabled via Enablement package 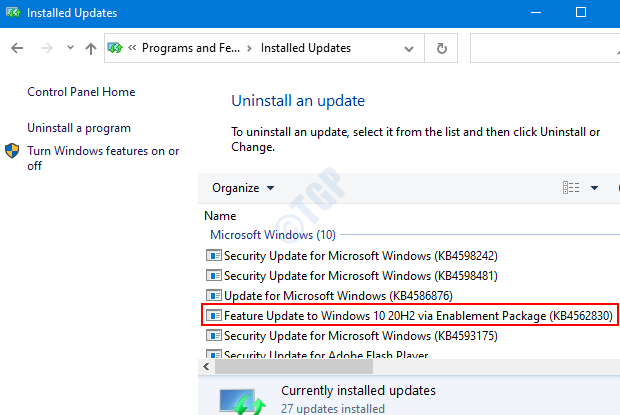 That’s All. Hope this was informative. If you any questions, kindly let us know in the comment section.

1 thought on “What is Enablement Package in Windows 10”