In our last post, we mentioned how internet has given us the power to influence the course of someone else’s life. The power is really enormous and can have really scary effects.

While the 2010 decade was about Facebook, twitter and other such social networking sites, the current decade clearly belongs to Whatsapp (an instant messaging app owned by Facebook).

Here are five Whatsapp messages that seemed really true but in actual are not.

Truth about chip attached to the Samsung battery

A video is doing the rounds on Whatsapp, that claims that a chip attached to the Samsung battery that will transfer all your personal data including your personal photographs and video to the database of Samsung.

Reality: The chip is actually thermo-monitoring chip. The purpose of the chip is to monitor the temperature of the lithium battery and prevent it from exploding during charging. Just think, any data transfer needs to use your internet connection. The amount of data which the person is talking about will eat up all your data plans. And what about those phones that don’t have a data plan activated. Obviously if you remove the chip it will not affect the function of the phone, but you will be removing a safety net during the charging process.

This has doing the round since a year. Last year the term “Love Jihaad” was in news. Somebody floated the message that in movie Bajrangi Bhaijaan, the character of Salman Khan is actually a Muslim who assumes a Hindu identity to lure a Hindu girl, played by Kareena Kapoor Khan. This will promote Love Jihaad as more Hindu girls will start falling for Muslim boys.

Reality: Please see the trailer of the movie released on June 18, 2015 to see for yourself.

The process of making of Saboodana

The message doing the round on Saboodana claims that it is made in such a way that lots of insects  and eel are mixed while preparing the Saboodana. The raw material is allowed to rot for 4-6 months in large pits and insects fall in such a process. So saboodana, one of the most popular items used during the fasting among majority Hindu is not actually a vegetarian food.

Reality:  In reality the process is far different than what is actually claimed in this messages. The process may be unhygienic but it is nowhere close to what is being proclaimed. Please see the video for yourself.

This has been doing round since the age of Yahoo mail. It first surfaced in the year 2008. The greatness of the message is that, it has survived the test of the times, and has sustained itself, from Yahoo mail to Gmail to Facebook to Whatsapp. A typical message will read like the one in the image below: 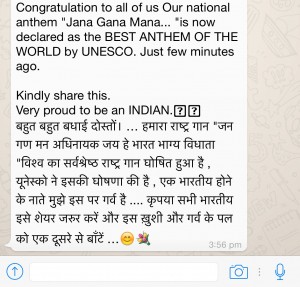 Reality: First of all, please go through the Wikipedia page of UNESCO. It seems really astounding that an organization responsible for such important activities would devote its time in identifying the best national anthem. There is no mention of the above fact on UNESCO website. To top it, UNESCO has itself denied any such ranking. And do you really believe that the Indian Media which is so hungry for any news at all, would leave such a golden opportunity for debate. The issue would be hotly debated on all the major channels if it were any true.

You will get a forwarded message from one of your friends, which will typically claim that it has originated from the CEO/ CXO of Whatsapp. It asks you to forward the message to ‘n’ number of contacts or ‘z’ number of groups and you won’t have to pay the charges. If you fail to do so, the app will become chargeable.

Reality: It is false, false, false. First of all, if the app developer decide to charge for the service, spamming other users is not going to save you the expense. It is a hoax.

Please note that we have not talked about all the messages where it says that forwarding this messages to 10 groups will bring good luck. If you don’t forward this message then you will face great difficulty in the next three days. Please stop spamming your friends and acquaintances with such stupidity. Forwarding message is not going to bring you good luck or bad luck.

1 thought on “Five Whatsapp fake messages, that seemed true but were actually false!”