Windows Update 1809 (October update) was problematic for many, so much that Microsoft had to halt it for a while. Of the many issues reported by users, one was:

The primary cause behind the issue is that the Windows Update 1809 messed up with the system files of the system it was installed in and this in turn affected the audio drivers.

Microsoft has released another update KB4468550 to help resolve the issue with audio, however, in case the system files have been messed up with already, they would have to be fixed.

Other than updating Windows, the following solutions would be helpful:

1] Re-install the audio drivers (if possible)

3] Roll-back to the previous build of Windows

The audio drivers could be reinstalled as follows:

3] Right-click and choose Update Driver Software for each of the audio devices. 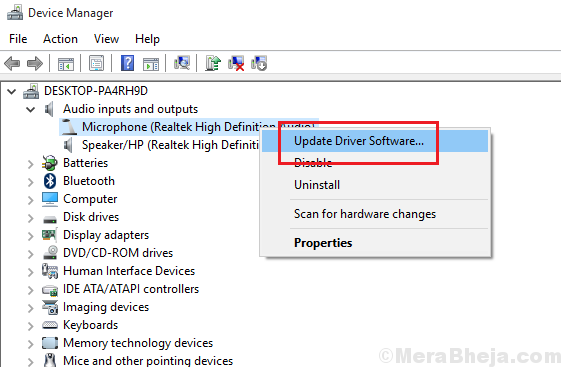 4] You might also consider uninstalling the drivers (right-click >> Uninstall device) and restarting the system. The drivers would get reinstalled automatically.

However, if the driver is broken or the concerned file is missing, it might not be as easy a task.

In case this issue is caused by missing files in the system, an SFC scan could be helpful. Here’s the procedure for an SFC scan.

Solution 3] Roll-back to the previous build of Windows

Since Windows update 1809 is known to be troublesome, it would be a good idea to roll-back to the previous build till a stable version is launched and users have confirmed that it is issue-less.

2] The system would restart in Advanced options.

4] Select Go back to previous version.

Restoring the system might help bring the lost files back. Here’s the procedure for the same:

3] Restart the system once done and check if it helps with the issue.