Users are allowed to install and run Linux Distribution on their Windows PC using the WSL (Windows Subsystem for Linux) feature. But, when installing the Linux subsystem via WSL, users have reported seeing the error “WslRegisterDistribution Failed with Error: 0x8007023e”. Generally, this problem is associated with the Windows Subsystem for Linux (WSL) itself being manipulated or the VM settings that are being used in Windows. Read this article and follow the fixes to overcome this error on your PC.

1. Press Windows and R keys on your keyboard to open Run.

3. In the Turn Windows Feature On and Off window, you need to disable all virtual machine-related options. 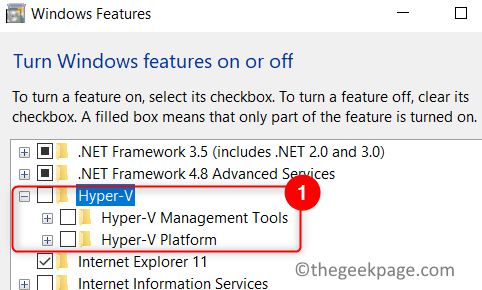 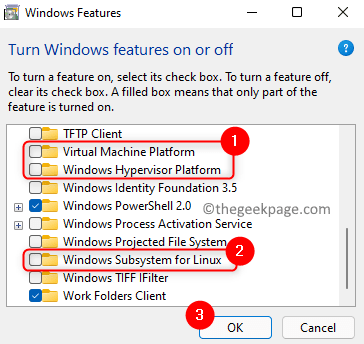 4. Click on OK. At this time, Windows Features looks for the required files and makes the changes.

5. On the confirmation prompt, click on Restart now to reboot your PC.

6. After your system reboots, go back to Windows Features as in Steps 1 and 2  and enable all the above options by checking the box associated with them.

7. Restart your PC again after re-enabling.

8. Check if you are able to launch the Linux Distribution without the error.

1. Press the Windows key and type powershell in the search box.

2. Right-click on PowerShell on the search result and click on Run as administrator.

4. Type the command below and hit Enter.

5. After the command execution, it prompts for a restart. Press Y to restart your PC to complete the operation.

6. Check if the error is resolved after the startup.

1. Press the Windows key and type cmd in the search box.

2. Right-click on Command Prompt and select Run as administrator.

3. Update the Linux Distribution using the command below.

4. Now open the Linux terminal and check if the error is solved.

If both the above fixes did not clear the error for you with Linux Distribution, then you need to uninstall and reinstall the WSL as there may be problems with the WSL itself.

A. Uninstall Linux Distribution and Windows Subsystem for Linux

1. Just hold the Windows and R keys simultaneously to open the Run dialog.

3. Locate your Linux Installation (for example, Ubuntu) in the list of applications.

4. Click on the three vertical dots next to it and select Uninstall.

6. Now locate Windows Subsystem for Linux in the list of apps.

8. After the uninstallation, remove all the associated files and components of WSL using Windows Features. Follow the steps in Fix 1 to disable WSL and Windows Hypervisor Platform.

9. Reboot your system and then install WSL.

B. Install Windows Subsystem for Linux

1. Hit the Windows and R key and type powershell in the Run dialog that opens.

3. Enter the command below.

4. It downloads the latest version of Linux and also turns on the needed optional components for the Linux subsystem to run.

5. Restart your computer after the command executes.

6. Perform a fresh installation of the Linux software that you had uninstalled previously. Launch your Linux terminal and check whether the error is resolved.

3. Enter the command below

4. Reboot your PC after the above command completes executing.

5. After startup, use the Windows Store to download and install the Linux distribution that you had uninstalled.

6. Launch the Linux application and check if the problem is fixed.

We hope you must have been able to overcome the WslRegisterDistribution Failed with Error 0x8007023e on your PC using the fixes in this article. Comment and let us know the fix that helped you.