If you are a motion graphic artist, you would know how important is the art of rotoscoping in physical animation. Pain notwithstanding, rotoscoping, just like the chroma keys, is still the most critical process in the industry (VFX/animation). However, it can also be tiring and time-consuming when done manually. That’s when you need a Rotoscoping software that automates the entire process reducing the pain to a large extent.

What is Rotoscoping Software?

Rotoscoping is a process of tracing over the movement of a movie scene, frame by frame, to create an animated version out of it. It basically aims to create life-like action by tracing over the actor in specific footage. It’s more of motion capture which is different from visual effects in the purpose.

While it creates an animation out of the moving scene of a flick, VFX creates a camouflage for an element that can be taken out and then fitted on the desired backdrop. This is further covered up in order to change the colors or for any other reasons. However, to use the software and its set of tools you would need some guidance.

So, let’s see which are the best rotoscopic software , which are best to help you start with rotoscoping. 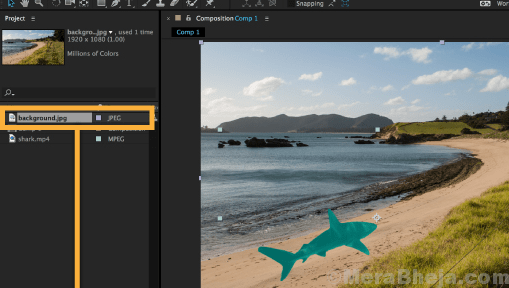 Adobe After Effects is one of the leading software programs that’s known to offer world-class motion graphics solutions. From creating film titles to intros and transitions, it offers all that goes into the making of an animated/VFX version of a movie scene. It enables you to extract an object from the said movie clip. Whether it’s making it rain or the character stand in front of a sea, create ng an animated logo or an imaginary character, this software allows you to transform your ideas into movements.

You can also take advantage of the advanced features for text by making animated titles, credits, or lower thirds. You can either start right from the ground up or use any of the pre-configured looks available in the app. To add movement to your text, you can also enhance it with spin, swipe, and slide effects. You can further blend the desired photos and videos, for instance, sending a spaceship to the sky, and much more. To get the desired effect you can easily remove people or objects from the video.

What’s more? You can animate almost anything such as logos or cartoons using expressions or keyframes. Alternatively, you can also use pre-configured looks to start with your design. The software also works perfectly with its other apps. Best of all, you can also import your creations from Photoshop, Illustrator, Character Animator, Adobe XD, and Animate.

Autodesk is a popular software provider in the field of engineering, manufacturing, construction, and even media and entertainment. It offers 3D designing as one of its services that offer the combustion software for rotoscoping. Which means, it can be used in the process of creating attractive visual effects for movies, inventive TV ads, or TV soaps.

It allows users to create fast and easy visual effects with the help of its extended range of tools. These tools can also be used for different creative projects. From making animated graphics to overhauling the videos found in different websites, or adding effects to movies or high-resolution applications. Some of its new features include:

Although the latest feature additions are for Apple Mac, this one step tool offers features for all platforms like paint, edit, animate, and even composing in 2D and 3D. It comes with an easy to use interface with the tools set in an integrated environment.

Blender, as we all know, is a free and open source 3D creation software. It supports a lot of features, such as animation, game development, video editing, and motion capture among others. It offers rendering support using its robust and impartial oath-tracer software. It also offers viewport preview in real-time, CPU & GPU rendering, and support for PBR shaders and HDR.

It features a wide range of modeling tools that help you create models, and even transform and edit them with ease. It comes with Python scripting for add-ons and custom tools, hosts of cutting-edge sculpting tools and brushes, complete support for N-Gon, Multi-resolution, and more. The VFX tool lets you import raw scenes, track them, cover areas, and even view the camera moves in your 3D footage, in real-time. It features auto and manual tracking, robust camera rebuilding, and planar tracking and tripod solvers support.

Apart from the above features, it’s also widely used in animation with superior-quality rigging and animation tools. Drawing story art in 2D and 3D is also among its major features. it comes with a customizable python-based interface where you can adjust the colors, size, layout, and also fonts. It allows you to create your own tools add-ons, draw on the OpenGL viewport, and more.

Silhouette FX is a widely acclaimed and Academy Award-winning software that’s known for its Roto and Paint feature. It comes with a fully featured GPU intensive compositing system featuring 142 stereos supported nodes. The trees allow you to link the processing nodes with clips and photos together to create the targeted effect. Moreover, it offers a complete range of exclusive composite tools that helps blend images with B-Spline, or Bezier shapes.

The 2D paint system is non-destructive, and helps restore, removes dust, wire, and rig. In addition, it also comes with fully-featured shape supported image morphing and warping. Special toolsets for building depth channels, their own matte removal technique that removes nearly any object in the image, and the option to stabilize image tracking with the help of point or planar tracks with mocha (at times), are some of its other major features.

One of the leading compositing software in the world, Fusion 9, is specially developed for visual effects artists. It’s also widely used by 3D animators, movie graphic designers, and in the broadcast spectrum. From television shows to Hollywood movies, Fusion has been providing motion graphics solution for over 30 years. It comes with a robust interface based on the node that allows you to create refined effects quickly and easily. This is achieved by linking different types of image handling programs in unison.

It comes loaded with a wide range of tools that include amazing support for VR and 3D, GPU enhanced performance, endless support for network rendering, and so on. Whether you want to sensational titles, visual effects, or thrilling broadcast graphics, it gives you all the tools for rotoscoping. While it offers support for all known VR headsets, it also provides amazing live viewing with VR headsets and more. It also analyses the camera movement of real-time action shots and rebuilds the 3D camera motion, etc.

You can track specific image areas, automatically detect the tracking info, and finally enumerate planes of movement to be used for stabilizing images. In addition, you can get remarkably clean keys from any color in the backdrop using the advance matte controls that help you save the minutest details. Planar rotoscoping is one of its other major features that can be applied to rotoscoped elements to help them move in the right manner and go after the motion and the view of the other objects in the same capture. A fresh new playback engine and multi-shot timeline, the addition of new formats such as MXF, ProRes, and DNxHR are some of its other significant features.

If you are looking for a chic rotoscopic solution, then, you can safely try the Nuke by Foundry. This powerful solution is especially known for its compositing, editorial, and reviewing capabilities. It comes with an advance toolset that includes industry-level keyers, rotoscope, color corrector, vector paint tools, and more. Moreover, it’s also equipped with tools for deep image compositing that helps you make and work with images featuring multiple opacity, color and camera-based depth samples pixel by pixel. This helps you get done with the re-rendering process of the CG elements as there’s a change in the content.

The built-in 3D camera tracker in the program copies the movement of a 2D camera with an animated 3D camera that lets you to composite 2D/3D elements perfectly in lines with the actual camera that has been used for the shot. It also features an unlimited, built-in 3D environment that allows you to build and render intricate footages made of lights, camera, 2D footage, 3D models, and more. If you want to set up a real environment this is what you need.

The users presets are straight time-savers that help you to set and store customized mode benchmarks for effects that can be implemented on different projects. It creates group settings of nodes for certain tasks by automating the process. The versioning feature, on the other hand, enables you to get in the latest editions of captures of its timeline or node graph and interchange them fast and easy.

The SDI broadcast helps you to keep a check on the color space and aspect ratios on the broadcast content while the review process is on. Additionally, the multi-track editorial timeline helps you make timeline effects and add them to the node graph. Alternatively, you can also edit and render compositions directly from the timeline.

Based on Python API, this program offers all that you need for rotoscoping and more.

The upgraded interface makes it easier for users to understand the Mocha process. In fact, now it looks much better on high-resolution and retina enables display. The Removal Module has been optimized to produce 4 to 5x render speed for the GPU video hardware. It now also includes mono/stereoscopic 360 effects and finishing.  Planar tracking for roto-masking, drive tracks, etc, plug-in feature for a fast and efficient process, advanced tools for effects and color correction, remove the module to remove unnecessary elements like tracking marks, 360 cameras, wires, rigs, etc., or insert module are among its other major features.

Rotoscoping is a complex process that requires special skills, time, and patience. But, giving shape to your ideas for transforming motion captures to action-packed animation would need some extra help. These rotoscopic software programs are exactly what you need to give your ideas that perfect finish in minimum possible time. So, get the one that suits you the most and get going with your ideas.