Unity has changed the 3D game development world with revolutionary ideas. In the earlier 2010 era, browser games all used to run on the Unity Web Players engine. But, in early 2017, Unity stopped support for the Unity Web Player, rendering all these gamers hopeless. But, what if we say that you can still play those games on your browser? Yes. It is quite possible to play the games built to run on Unity Web Player Engine.

NOTE before you proceed –

As we have earlier mentioned, Unity has moved on from Web Player and stopped the support for the Unity Web Player. This was due to the mainstream browsers killing the NPAPI API support on their browsers. All the current web browser games run on WebGL.

You can download the Unity Web Player from third-party links, as the official site has removed the link of the last build.

These are ways to play the games on Unity Web Player and try this one by one. But, be prepared for glitches and occasional bugs.

How to INSTALL the Unity Web Player

You can download and install Unity Web Player following these steps –

1. Download the last build of Unity Web Player from here.

2. Once you have downloaded the 1 MB app package, reach the download location.

4. On the Agreements page, click “I Agree” to continue. 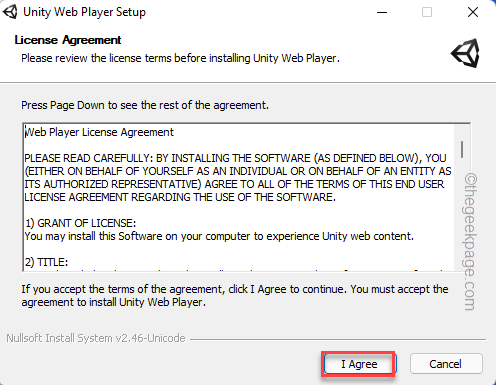 5. Finally, once you have installed it, click “Finish” to complete the process.

Fix 1 – Use the Mozilla ESR

Though the current version of Mozilla has ended the support for NPAPI, still you can download the Extended Support Release version and test.

4. Once you have downloaded the setup file.

5. Then, double-click to run the Mozilla Firefox ESR installer.

Carefully navigate through the steps and complete the installation process.

Once you have installed the Firefox ESR, try to launch the old browser-based game.

This should help you resolve the problem.

Fix 2 – Look for the latest version of the game

There is another thing you do. All the recent games have been ported to WebGL, as we have mentioned earlier. So, you can just look for the most recent version of the game on the web. Usually, web browser-based games are free and you should be able to find a newer version (or almost the same) of the old game that you are trying to play.

[FOR WINDOWS 7 users only]

2. Now, go to the location where you have downloaded this.

Follow through with the process and complete the installation.

Then, it is important that you restart your computer.

Step 2 – Run it from Internet Explorer

1. Make sure you have Internet Explorer installed on your system.

2. If you can’t find it on your computer, you can download and install Internet Explorer from here.

Launch Internet Explorer 11 and try to run a game running on Unity Web Player. Test if this works.