For the Windows versions that came out before Windows 11, taskbar icons have always been neatly aligned onto the left corner of the Taskbar space. But Windows 11, just like its other user interface enhancements, made a wonderful change to bring a cool look to its Taskbar as well. In Windows 11, all the Taskbar pinned icons are neatly centralized, giving it more of an Apple look. It’s very elegant and greatly designed.

However, not everyone likes sudden changes, especially to frequently used components like Taskbar. If you are one of those conventional users, you might want to get your Taskbar icons back to their positions. This article is all about how you can easily move the Taskbar icons from the center to the left position by following a very few steps.

Step 1: Right click on an empty space on your Taskbar.

Step 2: Taskbar personalization settings would now be open before you.

Scroll down, find and click on the tab named Taskbar behaviors.

Step 3: When the Taskbar behavior tab expands out, click on the drop-down menu against the option Taskbar alignment. This would, by default, be set to Center. 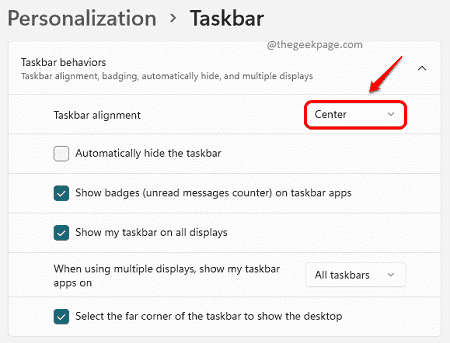 Changes would be instantaneous. You can now see the Taskbar icons moving to the left from the center with a cool animation effect.

Yes, it was as simple as that. Please tell us in the comments whether you found the article useful.