Try running these powershell commands to fix the issue.

1. Press the Win key and write “powershell” in the search box. 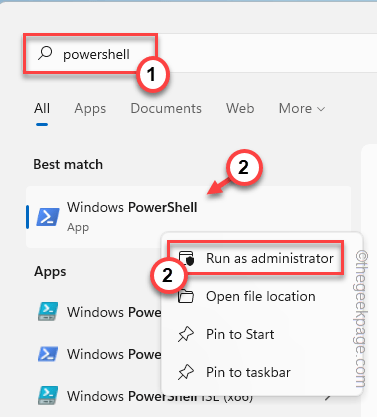 3. Now, paste this code into the PowerShell terminal and hit Enter.

4. After that, run this code as well.

After that, close the PowerShell terminal. Then, reboot your system, and once your device restarts, test if this works.

Antivirus may restrict SystemSettings.exe from working properly. Try pausing the antivirus and putting it on the exclusions list.

1. Close the Settings app, if it is opened yet.

2. Look carefully at the left corner of your taskbar. You will notice an upward arrow icon. Click on it.

3. Here, you will find several hidden icons alongside the antivirus that you are using.

4. Just right-tap the antivirus software and tap “Pause protection” to pause it temporarily.

Now, launch the Settings panel and check if it works.

There is another thing you can do in your antivirus setting so that it excuses the settings app from it.

We have shown how to put Settings.exe in the exclusion list of the antivirus in Windows Security. The steps should be the same for any other antivirus software as well.

2. When it opens up, tap the “Home icon“  and then click on the “Virus & threat protection“.

4. If you scroll down to the ‘Virus & threat protection settings’ click on the “Manage settings“.

5. Tap the “Add or remove exclusions“.

8. From the drop-down select the “File” type.

10. Select the “SystemSettings” application inside this folder and tap “Open“.

This way, you can put SystemSettings.exe in the exclusion list of the antivirus.

Settings should work just fine on your system.

If there are some core files missing from your system, running the SFC and DISM scan should help.

1. You can initiate both scans from the CMD terminal. So, press the Windows key and the R key.

2. When the Run box appears, write “cmd” in the Run panel. Just press the Ctrl+Shift+Enter keys together.

3. Paste this code in the terminal and hit Enter.

Allow Windows a while to run and complete the scanning process.

4. Once the scanning completes, run this code to restore the system files with a DISM check.

Once the scanning process is complete, close the terminal. Then, check whether the Settings is working or not.