DayZ is a survival video game introduced by Bohemia Interactive in the year 2018. Initially, it was for only Windows and then slowly they released a version for Xbox and PlayStation as well. It started gaining huge popularity within no time and now there are currently millions of gamers who play this amazing game.

But recently, we have been getting reports on an issue related to the DayZ game faced by lots of gamers around the world. When the gamers tried to launch the DayZ game, instead of launching the game it just threw an error message window and the game app gets crashed.

The error message that the gamers received while trying to launch the DayZ game is shown below.

Unable to locate a running instance of Steam

There could be a number of possible reasons why this is occurring on the Windows system and this is making the gamers very frustrated. We have picked a few of the causes and listed them down.

After analyzing these points, we were able to compile a few solutions which will definitely assist users in fixing them which are elaborated on in the article below.

Workaround to try – Try clearing up the disk space of the drive where the DayZ game is installed on the system. Because when the space in the drive gets low, it tends to throw such errors as mentioned above in this article. So we suggest users clear the disk space using the Disk Cleanup app.

If the game files get corrupted or are not organized in the system properly after any recent update, it throws such an error discussed above in this article. So verifying the integrity of game files can resolve this issue.

Here are the steps on how to verify the integrity of game files.

Step 1: Press the Windows key and type steam on the keyboard.

Step 2: Select the Steam app from the search results as shown in the below screenshot. 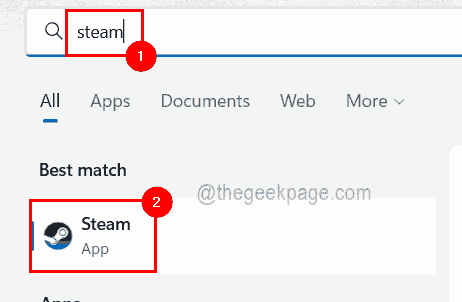 Step 4: Once you are signed in to the Steam app, go to the LIBRARY on top.

Step 5: Under Library, you will find all the games installed using Steam.

Step 6: Right-click on the DayZ game on the left side of the Steam app window and click Properties from the context menu as shown in the below screenshot. 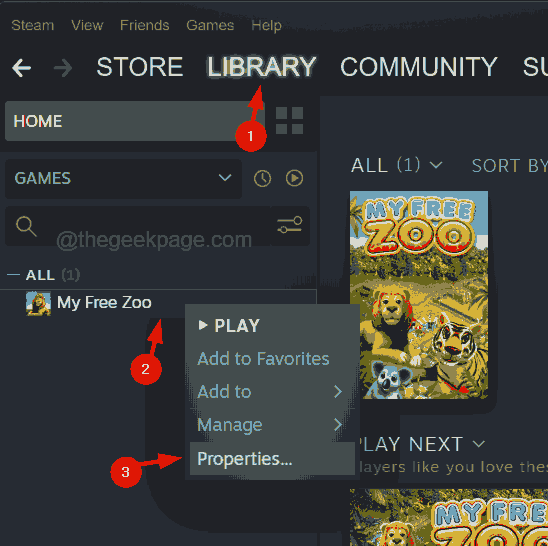 Step 7: Once the Properties window appears, select the LOCAL FILES option on the left menu.

Step 8: On the right side, click Verify integrity of game files option and wait till it finishes verifying the game files’ integrity.

Step 9: When done, close the Properties window and Steam app.

Step 10: Now try to launch the game without errors.

Fix 2 – Run the Steam app as an administrator

Follow the steps below on how to do it.

Step 1: Press the Windows and E keys together to open File Explorer on the system.

Step 2: Then copy-paste the below path into the address bar and press Enter key.

Step 3: This opens the Steam folder on your system.

Step 4: Inside the Steam folder, you can see many other folders and files.

Step 5: Now find the steam.exe file and right-click on it.

Step 6: Click Run as administrator from its context menu.

This opens the Steam app without any errors.

Fix 3 – Run the Steam app in a Compatibility Mode

Some users claimed to have resolved this issue by checking the compatibility mode and selecting the appropriate version of Windows for the Steam app. Let us see how this can be done using the steps below.

Step 1: Open the Steam folder as explained in Steps 1-3 from the previous method.

Step 2: Search for the steam.exe file and right-click on it.

Step 3: Select the Properties option in the context menu as shown below.

Step 4: Once the Properties window opens, go to the Compatibility tab first.

Step 5: Now click Run this program in compatibility mode for checkbox and select Windows 8 from the dropdown list.

Some Steam users reported that they were able to fix this issue by clearing the Steam configuration settings which you can perform using the steps explained below.

Step 1: Press the Windows and R keys together to open the Run box.

Step 2: Type steam://flushconfig in the textbox of the Run command box and then press the Enter key.

Step 5: This starts to clear the Steam app configuration settings.

Step 6: After this is done, you need to reopen the Steam app and you are required to sign in again with your Steam account credentials.

Let us see how this can be done using the steps below.

Step 2: Select Troubleshoot settings option from the search results as shown below.

Step 4: On this page, you need to scroll down to the Network Adapter option.

Step 5: Now click its Run button and this pops up the troubleshooting wizard.

Step 6: Follow the onscreen instructions to detect and fix the problems related to the network adapter.

Step 7: Once done, you can close the troubleshoot page.

Sometimes due to a huge load of requests from the gamers, Steam’s server gets shut down temporarily. This also applies to the PlayStation’s server as well. For regular maintenance, Steam shuts down its server for some time so during this time also the server remains shut.

After checking the status of the Playstation server, Steam server and DayZ game server, if it is down, we suggest you wait for a few hours and then try launching the game again on your Windows system.

Fix 7 – Restart the System and the Game

Usually, such errors can be resolved by restarting the system a few times and then trying to launch the game. Some gamers have tried this method and they were able to fix this error and launch the game without any issues.

Also, make sure there are not many unnecessary background applications running simultaneously on the system.

Fix 8 – Get the Standalone Launcher of the DayZ game

This is the workaround you can try for launching the DayZ game on the system without any errors by installing the standalone launcher of the DayZ game from a reliable third-party source.

Here are the steps on how to get the standalone launcher of the DayZ game.

Step 1: Open the web browser app on your system.

Step 2: In a new tab, copy-paste the below URL in the address bar and hit the Enter key.

Step 6: Once it is done, you can go to the Downloads folder on the system and double-click on the setup file.

Step 7: Perform all the instructions for installing the standalone launcher app.

Step 8: Once done, you can open the launcher app and start using the DayZ game.